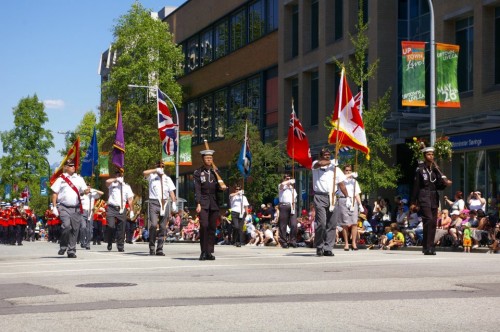 Members of the public looking to host a parade or procession must be in compliance with Section 505 of the City of New Westminster’s Street and Traffic Bylaw:

For the purposes of Section 505 of the Street and Traffic Bylaw:

“City” means the area of the Corporation of the City of New Westminster.

“City Engineer” means the person duly appointed for the time being as City Engineer of the City and includes any person appointed by Council by resolution or under this bylaw as set forth in a Schedule attached to and forming part of this bylaw.

“Parade” means any procession or body of pedestrians, except members of the Armed Forces, numbering more than 30, standing, marching or walking on any street or sidewalk, or any group of vehicles numbering ten or more, except funeral processions, standing or moving on any street.

505.1.1 the parade is under the direction or control of some person or organizer; and

505.1.2 a letter of consent for such a parade has been issued to the organizer by the Chief Constable as hereinafter provided and is accompanied by a street occupancy permit issued by the City Engineer.

505.3 No person or persons shall hold a parade unless an application for a street occupancy permit has been approved by the City Engineer at least 72 hours prior to the commencement of the parade.

505.4 The City Engineer shall not approve an application for a street occupancy permit for a parade unless it is accompanied by:

505.4.3 an explanation of the nature of the parade, the day and hour on which such

parade is to be held, the place or places of formation and disbandment thereof.

505.5 Any street occupancy permit issued under this Section shall be void and of no

effect unless the applicant obeys the terms and conditions therein.

505.6 No person shall drive a vehicle through or across any parade at rest or in motion, or in any other way obstruct, impede or interfere with any person lawfully taking part in such parade.