The mission of the New Westminster Police Department is to work with the community to establish a safer environment by reducing crime, violence and fear. The department has three major divisions; general patrol, criminal investigation, and administrative and technical services. Community involvement, crime prevention and quality service are some of the key strategies which the department has implemented to help it achieve its vision of making New Westminster’s streets the safest in the Lower Mainland. 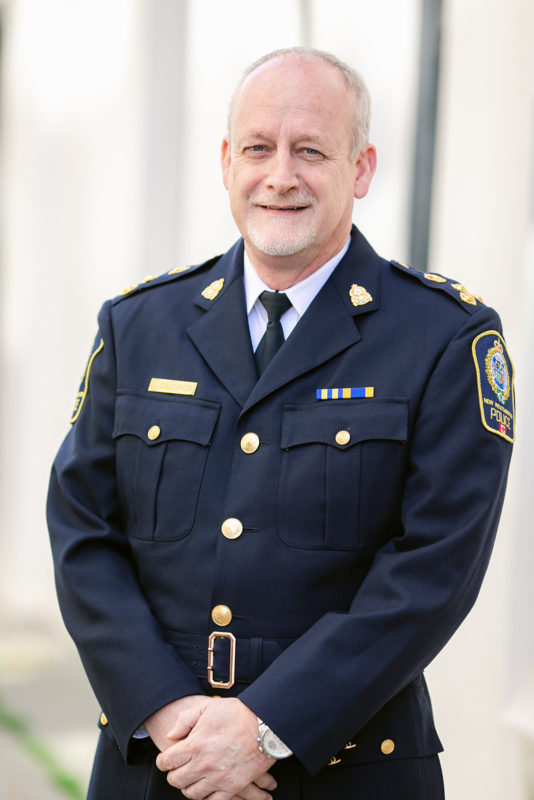 Chief Constable Dave Jansen began his policing career with the New Westminster Police Department in 1990. During his career he has worked in a number of positions, including patrol, the Operational Support Unit, the Major Crime Unit as well as a secondment to the Integrated Homicide Investigation Team (IHIT) as a team leader.

Chief Jansen has an Advanced Executive Certificate in General Management from Queens University. Chief Jansen is an accredited Team Commander and has also received his certification as a Gold Commander from the College of Policing in the United Kingdom.

Chief Jansen has been the recipient of three Senior Officers Commendations and an OIC Commendation from the RCMP.

During his time as an Inspector, Chief Jansen spent time overseeing all three divisions the latest being the Administration Division 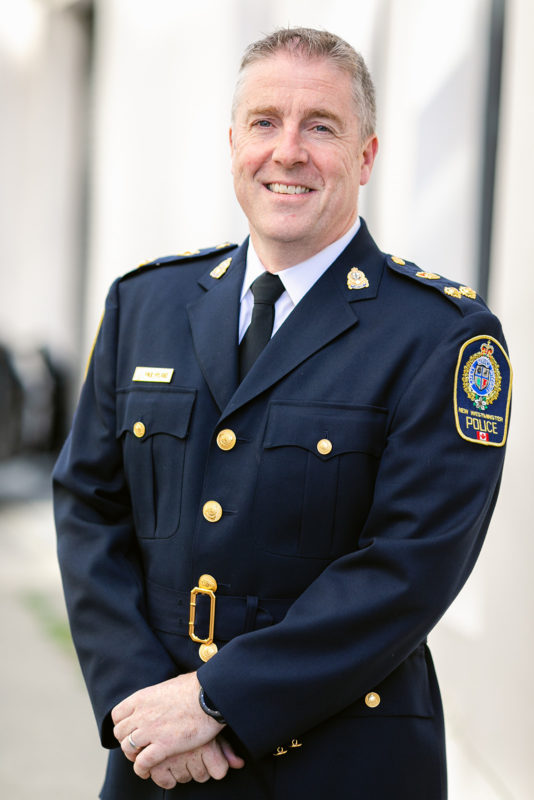 Deputy Chief Constable Paul Hyland joined the New Westminster Police Department in November of 1995. After graduating from the JIBC Police Academy in 1996, he worked in a variety of positions including uniform patrol, the Street Crime Unit, the Emergency Response Team and the Major Crime Unit. First promoted to the rank of Sergeant in 2007, he worked as both a Patrol and Major Crime Unit supervisor. In 2008 he was promoted to the rank of Staff Sergeant where he worked in the Major Crime Unit, as a Watch Commander on a patrol shift and later as the Admin NCO overseeing HR, Staff Development, Recruiting and Strategic Communications.

Deputy Chief Hyland was promoted to Inspector in 2014 and worked in all three divisions of the Department including Patrol Operations, Support Services, and Administration. He was placed in the acting Deputy Chief role in April of 2019 and confirmed in the rank in 2020. Holding a Bachelor’s Degree in Criminal Justice Studies, Deputy Chief Hyland has also taken Executive Management Training in Leadership, Public Sector Management and Strategy from the Smith School of Business at Queens University.

During his career, he has received a number of awards and commendations, including the BC award of Valor for his role in the apprehension of an armed suspect after an officer involved shooting in 2003. Deputy Chief Hyland’s wife Jennifer is also a police officer serving as a Deputy Chief Constable with the Surrey Police Service. Together they have two children which keeps them actively engaged in community activities and sports including swimming, hockey and lacrosse. 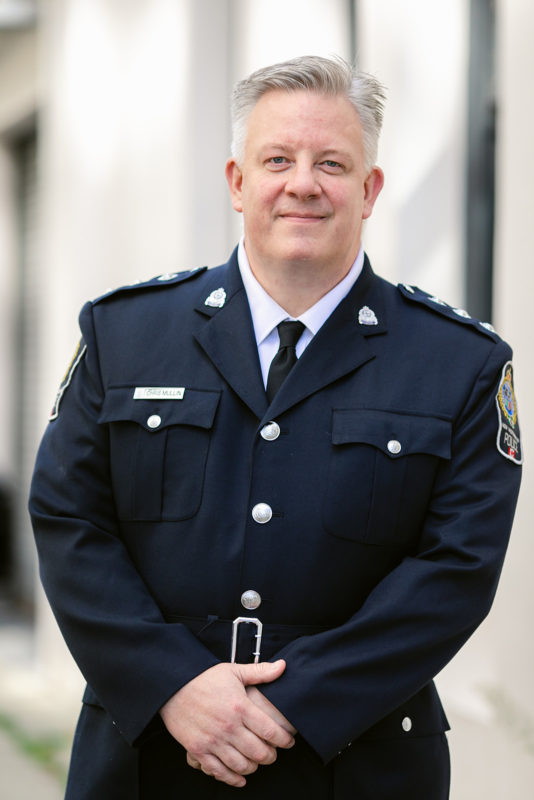 Inspector Chris Mullin began his policing career with the Delta Police Department in 1996, before transferring to the New Westminster Police Department in 1998.  He has worked in a variety of positions as a Constable, including uniform patrol, the Street Crime Unit, the Major Crime Unit and two and a half years with the Integrated Homicide Investigation Team.  In 2002 – 2003, Chris represented the New Westminster Police Department on a two year joint forces homicide task force targeting members of an ongoing LMD gang conflict.

Inspector Mullin was first promoted to Sergeant in 2008 and led the Department’s Major Crime Unit.  In 2009, Inspector Mullin received his Provincial Team Commanders Accreditation.   During his tenure as Sergeant and prior to the implementation of the IIO, he worked on a number of external statutory investigations on behalf of the RCMP pursuant to the RCMP’s 54.1 policy.  Chris continued his oversight of the Criminal Investigations Division after being promoted to Staff Sergeant in 2012 and maintained oversight of the Major Crime Unit, Street Crime Unit, Forensic Identification Section, Criminal Intelligence Unit, Domestic Violence Response Team and the FOI unit.

In 2013, Chris was assigned to the Professional Standards Unit to lead a significant Police Act investigation until his promotion to Inspector in 2015.  Between 2007 and 20015, he was an ad hoc member of the E Division RCMP Provincial Interview and Interrogation Team, responsible for providing subject matter expertise in the area of suspect interviews.

Inspector Mullin was seconded to the Combined Forces Special Enforcement Unit – BC, the Province’s Anti-Gang Unit where oversees five investigation teams in Lower Mainland and the North District team in Prince George. Inspector Mullin has oversight of the Outlaw Motorcycle Gang (OMG) portfolio for CFSEU-BC and currently sits on the OMG Tier (2) as co-chair for the Criminal Intelligence Service of Canada (CISC).  Inspector Mullin chairs the BC Provincial OMG steering committee and has worked to implement BC’s newly created Provincial OMG Strategy throughout the Province in collaboration with external stakeholders.

In 2014, Inspector Mullin was awarded a RCMP Commanding Officer award in recognition for a successful outcome on a two-year long homicide investigation.

Since 2015, Inspector Mullin has sat on the British Columbia’s Team Commander Accreditation Committee, a committee responsible for developing and promoting best practices specific to Major Case Management.  Inspector Mullin has a diploma in Criminal Justice from Camosun College, a BA degree in Political Science from the University of Victoria and has also completed an Executive Development Program through the Smith School of Business at Queens University.

Inspector Mullin is currently on secondment with the Metro Vancouver Transit Police. 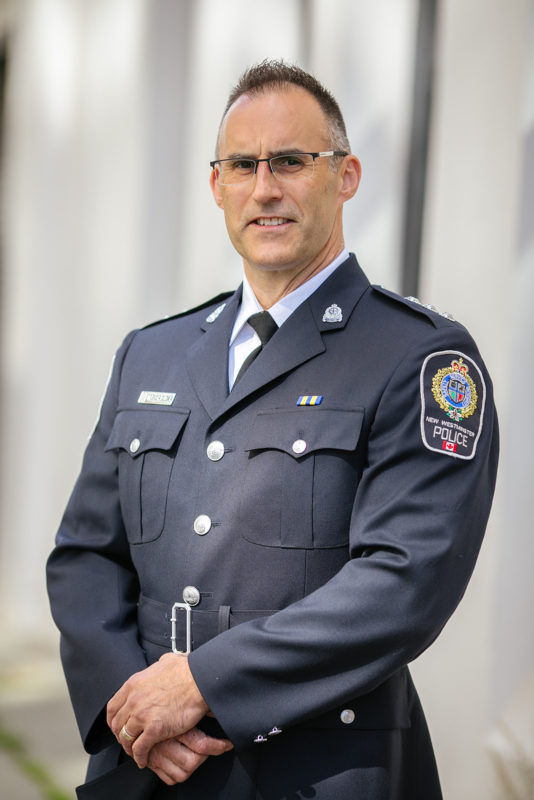 Inspector Trevor Dudar began his policing career in 1990 with the Taber Police Service in Alberta before joining the New Westminster Police Department in 1998. As a constable, he worked assignments in patrol and the street crime unit. In addition, he specialized as a collision analyst and was also a member of the Emergency Response Team and Marine Unit.

He holds a Diploma in Law Enforcement from the Lethbridge Community College and a Bachelor of Science Degree in Criminal Justice from the University of Great Falls. He also obtained an Executive Leadership certificate from the Smith School of Business at Queens University in 2016.

Inspector Andrew Perry began his policing career with the New Westminster Police Department in 2001 and in 2006, he was transferred to the Major Crime Unit as a Detective Constable.

After five years working in the Major Crime Unit, Andrew was seconded to the RCMP Anti-Corruption Unit for a year to work on an investigation.

That same year, Andrew was the recipient of a Senior Officers Commendation, for his involvement in an investigation which led to the seizure of 300kg of Methamphetamine and Cocaine.

Andrew was promoted to the rank of Sergeant in 2012 and was assigned to the Professional Standards Unit.

Andrew has been selected twice by the Senior Management Team to conduct major performance audits for the organization, the first for the Records Section and second for the Finance Section.

Andrews holds a Graduate Diploma in Business Administration from Simon Fraser University and a Bachelor of Arts – Psychology Major from the University of Western Ontario. 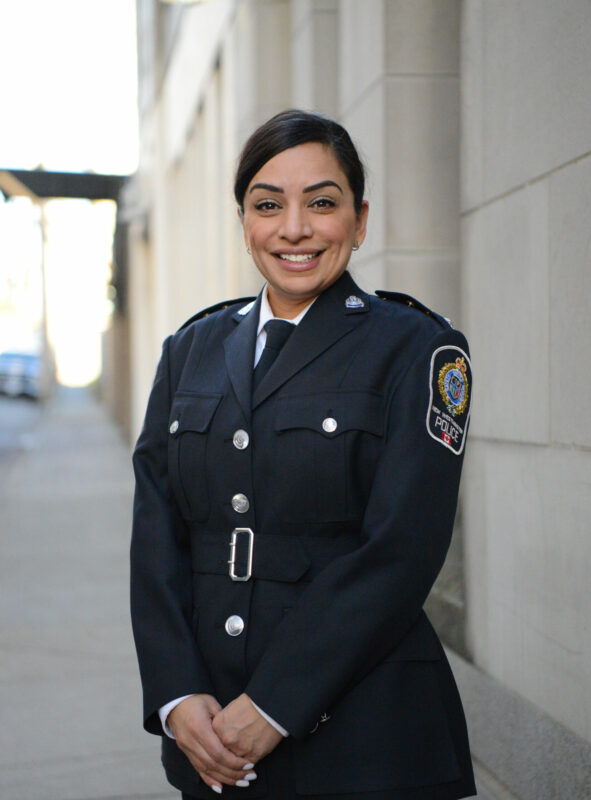 Inspector Gosal completed her Associate of Arts Degree from Douglas College and worked as a Corrections Officer before being hired by the New Westminster Police Department in 2004. Early in her career, Inspector Gosal worked in Patrol Division and the Major Crime Unit. She has also had the opportunity to work in two secondments as an investigator at the Integrated Riot Investigation Team and CFSEU. 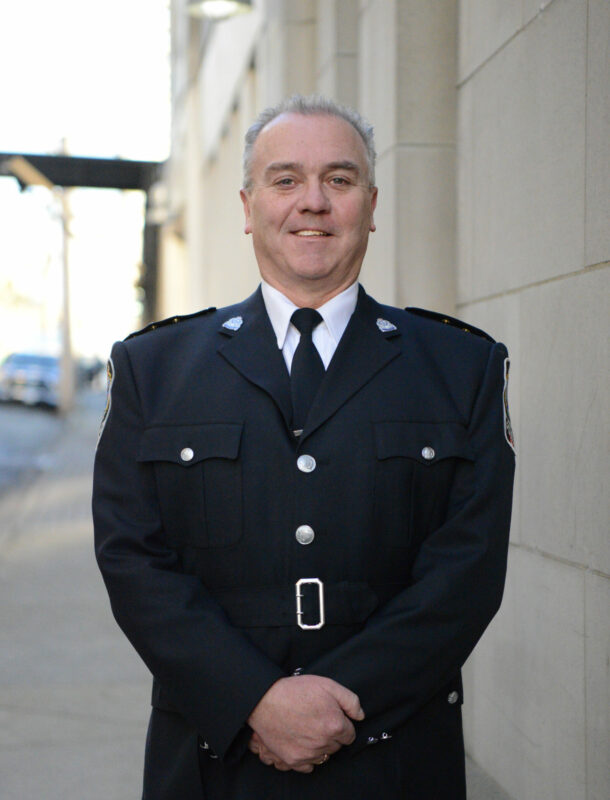 In 1998 Inspector Ward graduated from SFU with a Bachelor’s Degree in Political Science and Criminology. He began his career with the NWPD on May 10, 1999 and began his career on A Watch. In 2002 Inspector Ward was transferred to the Street Crime Unit. While working in SCU, he joined the Emergency Response Team which became the Municipal Integrated Emergency Response Team. In 2005 Inspector Ward became a member of the Integrated Homicide Investigation Team where he remained until 2008. In 2008 he returned to the NWPD and was assigned to the Major Crime Unit where he was involved in numerous serious investigations.