“As a commercial vehicle inspector I’m looking for unsafe situations each day,” stated Special Constable Frayle. “In my gut I knew that man needed checking on. It didn’t seem right, so I called for help.”

Within minutes Constables Faris, Heath, and Hildebrand approached the location where the man was last seen to find him walking in traffic and clearly disoriented.

“The senior was nearly hit by passing vehicles as he walked down the middle of the road,” stated Constable Faris. “I was extremely concerned for this man’s safety and I knew I had to get him off the road as soon as possible.”

Once at the safety of the roadside Constable Faris confirmed the identity of the man and found him to have been reported missing by his family in Burnaby. Constable Faris drove the man to the New Westminster Police Department where he was made comfortable before being reunited with Burnaby RCMP and his family.

“My sincerest thanks to both Special Constable Frayle and the three constables who worked to ensure this man’s safety,” stated Chief Constable Jansen. “Sadly, lost and frightened seniors are something we respond to on a regular basis and I’m relieved that this instance had a happy ending and this man was reunited with his loved ones.” 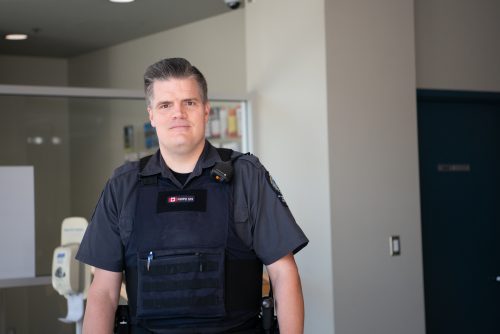