New Westminster – On the 100th year since the end of World War I, the New Westminster Police Department is unveiling a Remembrance Day shoulder flash that officers will wear as part of their duty uniforms. The shoulder flash is in honour of those who answered the call of duty to serve their country.

“Today we have the privilege to resolve our differences through dialogue and the rule of law because thousands of Canadians saw those qualities as precious enough to die for,” said Chief Constable Dave Jones. “The men and women of New Westminster Police Department are wearing this symbol of remembrance to honour both the sacrifice of those who stood up for us and those who continue to protect us today.”

The New Westminster Police Department has had a close a longstanding relationship with the Canadian Armed Forces. From employing former military veterans to supporting the work the local Royal Westminster Regiment.

“BC/Yukon Command is grateful that our brothers and sisters from the New Westminster Police Department are recognizing the sacrifice of Canada’s fallen veterans and helping to ensure that Canadians never forget,” stated David Whittier, the Executive Director of the Royal Canadian Legion for BC and the Yukon. “We honour them for their own courage and sacrifice in keeping the citizens of New Westminster safe and secure each and every day and encourage our fellow Canadians to take the time to recognize and thank all who serve in uniform, be it overseas or at home.”
The New Westminster Police Department will also be unveiling a police memorial shoulder flash as a sign of respect for fallen police officers.

“As a society, as police officers, as people who enjoy the rights and freedoms given to all citizens, may we never forget the sacrifices made by those who have given everything defending and protecting us,” stated Sergeant Jeff Scott. “We will never forget the members of our armed forces, past and present, and members of the police community who have given their lives protecting our communities; we are deeply thankful to them.”

Chief Constable Dave Jones will be available to media at 3:00pm on November 8, 2018. Please RSVP by emailing Sergeant Jeff Scott at jscott@nwpolice.org 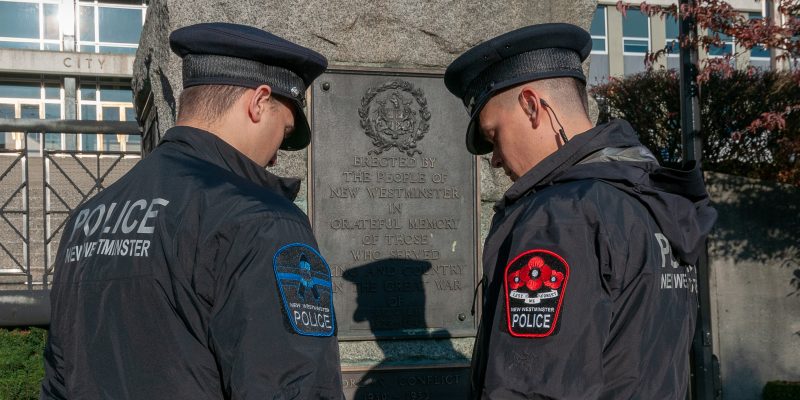